Moving up the executive career ladder

If you are a senior manager looking to move the next step up the career ladder to executive level, or if you are already an executive but are looking to rise yet further then there is one thing you can be certain about – you won’t be alone, and the competition will be fierce!

Regardless of the competition, the good news is that if you are proactive, and sensible about the way you go about things, then you can gain the upper hand over the competition – even very strong candidates with excellent credentials.

This ‘moving up the executive career ladder’ series of tips and articles is especially designed to give you the tools and knowledge to make that next upward career step. Moreover, the same principles apply for the next promotion, and the one after, and so on …

So if you are ambitious, and want to move up into better, higher paid jobs then you should find the following tips and advice useful.

Many people, including many executives don’t really plan their career progression. For some, progression (if it happens) is quite haphazard; determined by chance, openings, fortuitous meetings or even things such as buyouts, mergers and acquisitions, takeovers or redundancy.

A lot of people find themselves in better jobs not because they specifically set out to land those jobs, but because circumstances dictate that a change was not only inevitable, but was pretty much forced upon them. In such cases the career progression can be said to be reactive rather than proactive.

This is all well and good if (A) the change is actually a change in the right direction, and (B) results in a job that you actually like. But this isn’t always the case, and not all ‘career progression’ is perceived as positive in the long term. For example, if you get promoted from senior accountant to the deputy finance director of small firm, but your ultimate aim is to be a CEO of a large firm then this promotion may not be the ideal stepping stone to your real goal. In fact, it could even see your career stall. True, deputy finance director is a position that shouldn’t be sniffed at, but if it’s not what you want, and it’s not really going to help you get where you want, then is it truly ‘progress’ in real terms?

Your career may last 50 years over the course of your working life. And sometimes decades fly by. Many people get settled into a job, and rather like going on autopilot, they just go through the motions year after year until a change is forced upon them, or they finally become proactive and put their own career in their own hands.

Going back to the point I made earlier regarding ‘if it happens;’
Career change, and especially reactive career change isn’t always upward, and certainly isn’t always for the better. If you lose your job there is no guarantee that you will get any other executive job, let alone one you like more, or one that is higher up the executive career ladder, with increased pay and with better prospects.

If you bide your time until you are forced (frequently at short notice) into reacting to change then frequently this isn’t to your advantage. Each case is different, and numerous factors come into play including the prevailing job market, the competition and your own personal circumstances. For example, an IT director who has spent the last 25 years presiding over legacy systems may struggle to get a similar job with companies using newer, more modern technology. Similarly, whatever your previous job you may find that times have moved on, and that your competitors are more up-to-date, are more clued-up, and have newer, more appropriate specialist qualifications.

Moreover, these are just a couple of potential hurdles. If you try to change your job after many years in a previous one then frequently there are potential stumbling blocks are around every corner. Even this aforementioned ‘corner’ could be prohibitive geographically speaking if you live in an area where the jobs are hard to come by and you are not able to, or are unwilling to travel/commute.

I could go on, but you get the gist; yes, you could sit comfortably in your current job, potentially for years – and you may have a great career doing just that. However, if it isn’t quite what you want, and if the job isn’t quite as safe as you would like it to be, then it may be an idea to get more proactive about your career, rather than keep nervously looking over your shoulder waiting for someone to sneak up behind you and give you a great big shove.

Moving up the executive career ladder

What is an executive CV ? 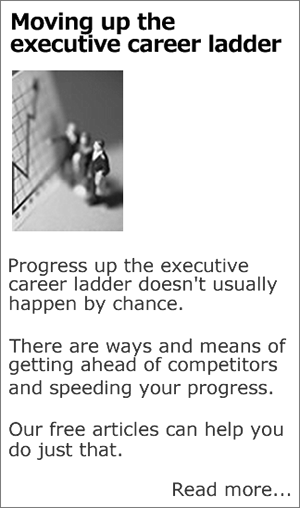 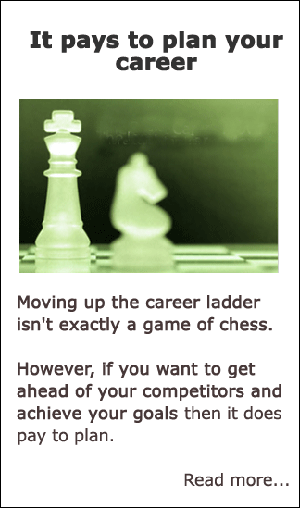 Previously I mentioned the difference between being proactive and potentially waiting until being forced into being reactive. The distinction is significant, and it does pay to be proactive if you have particular career ambitions or any concerns about the safety/durability of your current job. Even so, it doesn’t necessarily mean that you need to be constantly plotting your next career move. You don’t. Moreover, if you did constantly plot, and you did change jobs every six months then you would not only look like a job hopper to potential employers, but you could also miss out on potential opportunities and benefits. For example, experience is a vital commodity, and one of the best ways of getting experience is by doing a particular job for a certain amount of time; gaining knowledge from colleagues (and internal training), learning the ropes, and even learning from your mistakes.

Employers almost always prefer specialists to jacks of all trades, and it’s difficult to become a specialist in anything if you keep switching jobs, or changing career direction. Yes, it’s not quite the same if you just change companies but keep doing the same kind of work. Even so, as mentioned, if you do that there is a risk of gaining a reputation as a job hopper, as well as missing out on potential internal promotions and internal progression.

Please therefore don’t think that being proactive is the same as being constantly on the look-out or glued to the job boards. There is a time and place for everything, and when it comes to key job moves these tend to happen at intervals measured by years, not weeks or months. Of course, some people just don’t like their job, or quickly realise that it isn’t quite what they thought it was, or it is not getting them where they want to go career-wise. In which case it does make sense to change jobs sooner rather than later. However, if you have really thought about your career, and you plan and you are careful about your career decisions, then it is less likely that you will feel the need to jump ship prematurely. Those who do bail out early tend to be those with a more haphazard/fatalistic career attitude, rather than those who think about their career, plan ahead and strategise.

If planning ahead and strategising about your career decisions seems alien to you, then it’s something you should think about, and quick – because if you don’t, your competitors will.